A brief history of the Magic Lantern

The Magic Lantern is part of the marvellous world of optical projection. Our introduction, presented chronologically, merely touches upon the most significant developments. As a Society we continue to research, discover and share.

If what you see here intrigues you, why not consider becoming a member? We'd love for you to join us.

The rudiments of image creation have been known about for hundreds of thousands of years, and image projection for at least 2,000 years. The origin of Shadow Shows must go back to the time humans discovered fire, entertaining and terrifying each other with shadows on the walls of caves, using the fire as the source of light.

The Romans knew about the Camera Obscura. They noticed that if strong daylight entered a darkened room through a tiny hole in the window shutter or curtain, a dim but clear inverted image of the outside world appeared on a white wall opposite the hole.

The Chinese and Japanese made Magic Mirrors, the earliest recorded instance occurring in 5th century AD Chinese documents. A Magic Mirror is basically a highly polished disk of bronze. When light from a small bright source is reflected from the mirror onto a screen an image is produced (usually of the Buddha) although no image is visible on the mirror itself.

But for lanternists the most significant developments occurred a thousand years later. This was a time when there was much interest and scientific excitement about optics, in theory and practice. 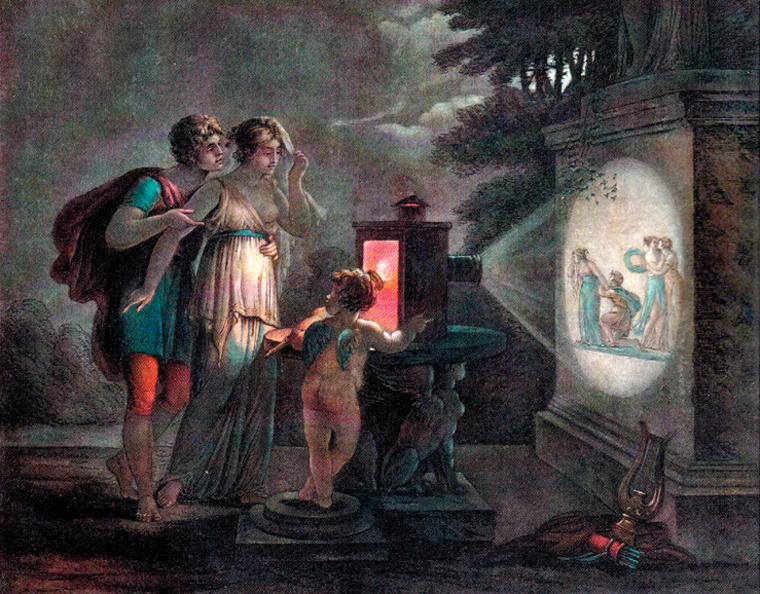 What do you need?

In order to produce a projected image you need to bring together four basic things:

The 'Fathers' of the Lantern

The earliest reference known to anything like a projection lantern is from Liber Instrumentorum by Giovanni de Fontana, published c.1420. The illustration shows a man holding a lamp or lantern, and on the wall is a large projected picture of the devil. The detail of the lantern shows the outline of a small image of the devil. Fontana describes it as a nocturnal appearance for terrifying viewers.

Clearly the device has no projection lens, so the image it produced would not have been very sharp, though no doubt it served its purpose. The image on the lantern is upright and the projected image is also upright, which is quite correct optically. A number of modern nursery toys work in the same way, and produce quite effective images.

Although there is no particular evidence that Fontana invented the Magic Lantern, Willem Tebra argued very strongly (in New Magic Lantern Journal Vol. 2 No. 2) that he had described the real concept of a magic lantern.

About 160 years later, Giovanni Battista della Porta published Magiae Naturalis Libri Viginti, in which he described the ancient art of projecting mirror writing. The book was translated into English as Natural Magick in 1658.

Athanasius Kircher, a German Jesuit priest, published Ars Magna Lucis et Umbrae, in which he improved on della Porta's work, including arrangements to project using sunlight or candle light, using a convex lens as an objective to focus the images.

Kircher is one of the most famous names in the history of the lantern and is often mistakenly credited with its invention, but Kircher did not publish details until 12 years after Christiaan Huygens had a lantern and six years after Samuel Pepys had bought one.

Who invented the Magic Lantern?

All over Europe, people such as Dutch astronomer, mathematician and physicist Christiaan Huygens (1629-1695) and the Danish mathematician Thomas Rasmussen Walgensten started to develop working models of Lantern Projectors. Huygens had a lantern in usable form at least as early as November 1659. His father kept pestering him to send him a lantern so he could "frighten his friends with it."

Thomas Walgensten was the first person to use the term Laterna Magica. Walgensten not only realised the technical and artistic possibilities of the Magic Lantern, but also its economic potential, travelling round Europe demonstrating and selling them.

A Frenchman, Balthasar de Monconys, recorded how he visited the London optician, John Reeves, on 17 May 1663 to be shown "how a bull's-eye lantern works". The diarist Samuel Pepys bought a lantern from Reeves on 19 August 1666, a fortnight before the Fire of London. In his diary he wrote Comes by agreement Mr Reeves, bringing me a lanthorn, with pictures on glass, to make strange things appear on a wall, very pretty. A later entry tells how he purchased the lantern.

The famous English scientist Robert Hooke published an article in Philosophical Transactions of the Royal Society of London, in which he described a general projection arrangement for transparent and opaque objects. The illumination was either sunlight or a candle:
"It produces Effects not only very delightful, but to such as know the contrivance, very wonderful; so that Spectators, not well versed in Opticks, that could see the various Apparitions and Disappearances, the Motions, Changes and Actions, that may this way be presented, would readily believe them super-natural and miraculous.... So far our Inventor; who has not contented himself with the bare speculation, but put the same in practice some years since, in the presence of several members of the R. Society, among whom the publisher had the good fortune to see the successful performance of what is here delivered." Philosophical Transactions, Vol. 3 (17 August 1668), pp.741-743.

From the 18th Century onwards hundreds of people were involved in the development of the lantern and its accessories. As lenses, mirrors and especially light sources improved, projectionists could provide shows to larger audiences outside the home or laboratory.

Phantasmagoria and the Rise of the Showmen

In the late 18th Century several showmen used the lantern to produce horror shows. These were known as 'Phantasmagoria' shows. A variety of horrific images were projected to frighten the audience, examples being ghosts projected on smoke to give a frightening appearance and images that would move around the walls. Often the projector was behind a translucent screen, out of the view of the audience. This greatly added to the mystery of the show.

One of the most famous Phantasmagoria showmen was a Belgian, Étienne Gaspard Robertson (1763-1837). Robertson used a special lantern on wheels, which he called a Phantascope or Fantascope. By moving the projector backwards and forwards he could rapidly alter the size of the images on the screen, much like a modern zoom lens. The device was very cleverly designed to keep the picture in focus and at a constant brightness as the machine moved back and forth. He presented his show in Paris, and later took it to Vienna and St Petersburg.

But Robertson was not the inventor of the Phantasmagoria show. In New Magic Lantern Journal, Vol. 8 No. 1, Mervyn Heard explained how Robertson 'stole' the idea from a German, Paul 'Philidor' or Paul de Philipsthal. In Paris, Philipsthal gave advertised shows of spirits, ghosts and grand wizards on 21 January 1793, within weeks of the execution of Louis XVI. He later moved to London and opened an exhibition on Monday 5 October 1801 at the Lyceum theatre in the Strand. Philipsthal offered Phantasmagoria, and a museum of optical and mechanical curiosities, including automata.

The Galantee Showmen or Savoyards

In the early years of the 19th Century, showmen with lanterns travelled around the country giving shows in the places they stopped. These were known as 'Galantee' showmen or 'Savoyards', and they would give shows by projecting on walls or white sheets. The subjects would probably relate to Biblical, moral and current events, and the showman would create stories for the children watching.

As magic lanterns became cheaper to buy, and readily available in shops, people could create lantern shows for themselves at home.

The 'Professors' and the Polytechnic

The Galantee showmen gave way to the 'Professors', showmen who had access to more elaborate equipment and wonderful, but expensive, animated slides. Some of the most complex and spectacular lantern shows were presented at the Royal Polytechnic Institution, 309 Regent Street, London (founded 1838).

The screens at the Polytechnic were about 25 feet (8 metres) across, musicians accompanied the shows, and a team of sound effects people were assembled behind the screen. The projectionists often used four, five or six large-format projectors to present their fabulous shows of spectacular dissolving views. The Royal Polytechnic Institution closed in 1876 and the slides were auctioned off in 1882 for a total of £900.

Improvements in light sources brought changes in the style of shows. The development of Oxy-hydrogen limelight and Arc light made it possible for projectionists to create huge images and elaborate effects in front of large audiences.

Simpler types of lantern were also improved with the introduction of the mineral oil lamp. This allowed people to present shows in small halls and churches, which meant that the educational value of the lantern improved dramatically.

In the 1870s and 1880s there was a full flowering of the lantern trade. Companies such as Carpenter & Westley, York & Son, Newton & Co. and James Bamforth produced lanterns and slides for every occasion and location. In the 1880s and 1890s over 30 firms were engaged in the production of lanterns and slides in London alone.

On 28 December 1895 Louis and August Lumière gave their first public showing of the Cinématographe at the Grand Cafe, Boulevard des Capucines, Paris.

One conventional view says that from then on the lantern took second place. However, though the birth of the moving picture and its rapid growth certainly changed the world of the lantern, the reports of its death were very much exaggerated. Although less widely used for public entertainment, lantern projection continued in widespread use in areas like education and religious instruction.

From the 1900s onwards many of the smaller family lantern or slide businesses disappeared or were amalgamated with larger firms, but there were still lantern and slide suppliers trading until after the Second World War. From the 1950s the projected image found new uses and forms in the shape of the 35mm slide and new designs of projector like the Kodak Carousel.

New life for the lantern

From the 1960s the ‘traditional’ lantern medium experienced a sort of rebirth, as surviving slides and hardware began to be prized by collectors, some of whom saw the chance to recreate some of the original ‘magic’ by using original materials in new and inventive performances. Eventually there were enough interested people to consider starting a Magic Lantern Society!

The here and now

Today it is still possible to pick up an original magic lantern and lantern slides from auctions, antique shops and even car boot sales. The light source has changed with safety in mind. In fact, one Society member is still pioneering new adaptations looking to replicate that authentic look which will show off the slides to the best effect. The readings are more likely to be replaced by original narration, new meanings and sensibilities being projected onto the old images. The lantern slide has also found a new lease of life through artists who use them for inspiration and museum collections who are newly keen to restore and display these visual treasures. As for the art of projection, this has now overtaken the displays at the Polytechnic. The building itself has become the canvas.

Tools of the trade

Select one of the sections below to browse through images illustrating the types and forms of magic lantern, lantern slides and accessories, or to search and access our unique digitised collection of original lantern readings. 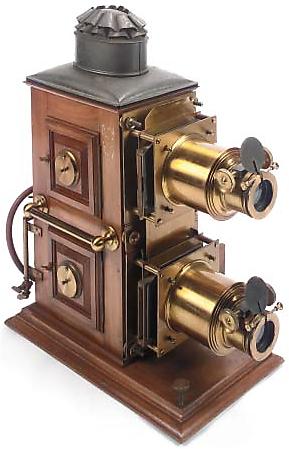 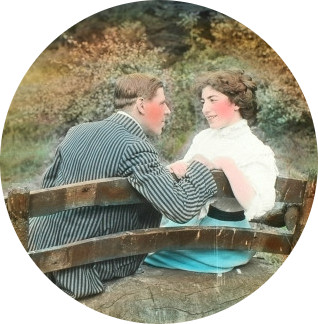 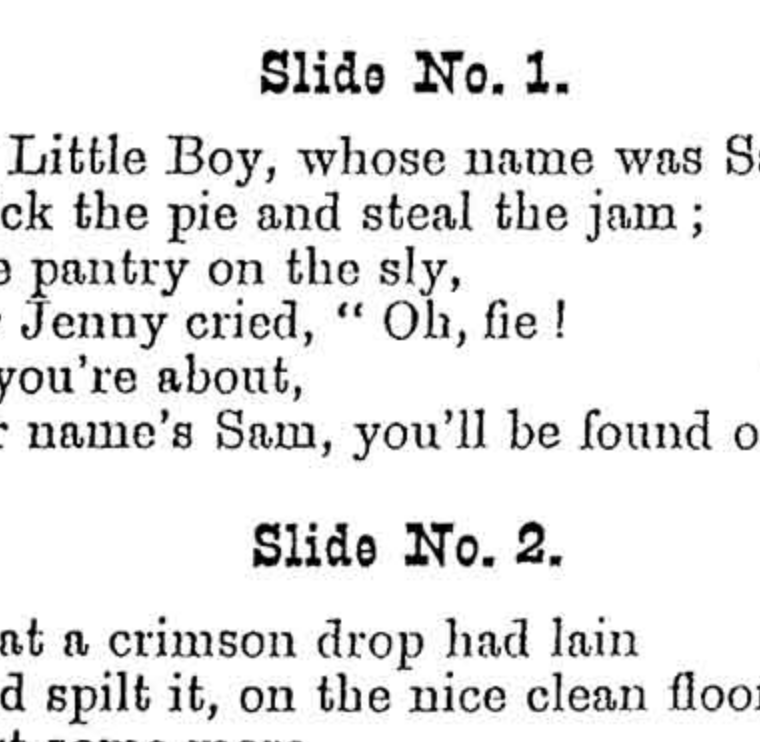