Offering shows in Germany (any region); internationally (any country)

Professional theatre company based in Germany but touring internationally

Illuminago is a professional theatre company which has presented shows in many different European countries and in Canada. Their performances involve musicians, actors and other performers.

Their repertoire includes a Ring Cycle (after Richard Wagner) in one evening, an experimental programme based around Der fliegende Holländer and a magic lantern version of Dickens' A Christmas Carol. Their composite shows on the history of the lantern feature a version of Loie Fuller's Serpentine Dance.

The Illuminago company has realised cooperative projects with many different partners such as Professor Heard, the University of Trier, the Cinémathèque de la Ville de Luxembourg and the Royal Opera House Covent Garden. 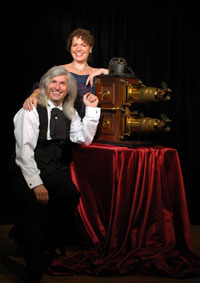